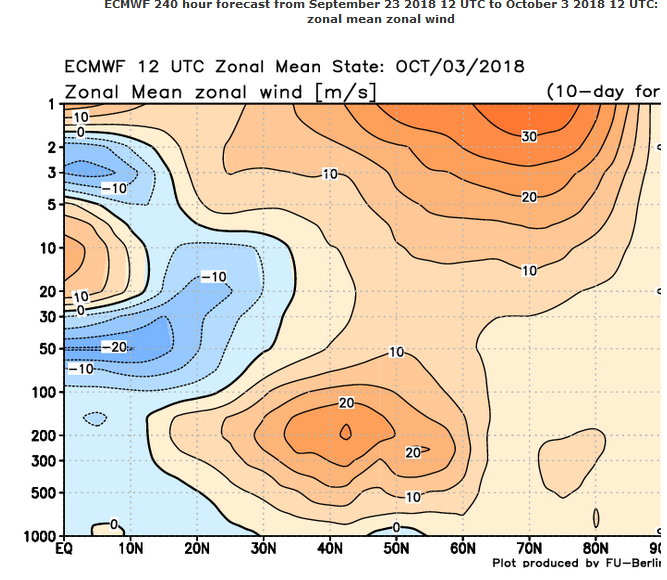 Een recente studie nuanceert een en ander:
Activities of the Madden&#8208;Julian Oscillation (MJO) in boreal winter has recently been found to be stronger in easterly phases of the stratospheric quasi&#8208;biennial oscillation (QBO) than its westerly phases. This QBO&#8208;MJO connection was investigated in this study using a method that identifies individual MJO events by tracking their eastward propagating signals in precipitation. Stronger MJO activities in QBO easterly phases are a consequence of more MJO days, not larger amplitudes of individual MJO events as previously thought. More MJO days come from more MJO events initiated over the Indian Ocean and their longer duration because of a weaker barrier effect of the Maritime Continent on MJO propagation. Zonal heterogeneity exists in the connection between QBO, MJO, and tropical total precipitation in general. This poses a challenge to our current understanding of the MJO dynamics, which has yet to fully include upper&#8208;tropospheric and stratospheric processes.

Enige bijstelling is te vinden in:

It should be fairly evident, unless you have your head firmly entrenched within the deepest recesses of a jack o'lantern, that this composite portrays a fairly harsh winter for at least the northeast. And potentially the mid atlantic, as well. However note that the word "composite" is emphasized, as there are voices of dissent among our analog set. The winter of 2006-2007 is perhaps the most prominent outlier of this set, so it was discussed at some length what variable(s) may have contributed to that particular outcome. The fact that the modoki characteristic of that warm ENSO event begin to decay very early in its life cycle, about at this time of year, was cited as one prominent reason why this particular analog is beginning to diverge a bit from the current season.

We also began to discuss the Quasi Biennial Oscillation (QBO) and the solar cycle as two contributing factors to the degree of blocking experienced in a given season. Please refer back to the last update for a deeper explanation of the QBO, but the simple explanation is that a negative, or easterly QBO favors blocking because it renders the polar vortex more diffuse and prone to disruption, and a positive, or westerly QBO is less favorable for this to occur. The mean QBO value in August 2006 was +9.10, and ascending, as compared to the August 2018 value of -20.41. This is one notable disparity between the two seasons, which could imply that 2018 is more likely to feature substantial high latitude blocking. However we also implied last week that this year's QBO value is in a state flux, and this is because it is rising, and transitioning with time to a westerly direction. This renders any prognostication a bit more nebulous. The trend of the QBO and its pace can be every bit as important as its absolute value at any point in time, which is an important consideration regarding analogs. That being said, here are the respective analog years and corresponding August QBO values and trends.

Clearly, based solely upon the QBO data, 1977 is the strongest analog of the weak el nino comparisons. However both QBO and the solar cycle need to be considered within the context of assessing the probability of sustained periods of blocking during the cold season.
Solar Minimum Looms
The number of spots on the sun is utilized as a rough proxy for how much solar energy is being emitted at any given point in time. And like everything here on plant earth, this waxes and wanes on a cyclical basis. This solar consideration is important because low solar output has been linked to sustained blocking, and thus harsher winters. For a better idea of whether or not this is true, lets assess the data.
The following is a list of solar cycles since 1950, which runs back to solar cycle 19, along with dates of accompanying solar minimum and solar maximums, as well as average length of cycle.